U.S. Internet advertisers spent $12.1 billion in the first half of this year — a new half-year record, and the highest second-quarter revenue on record, the Interactive Advertising Bureau reported yesterday. That figure is 11.3 percent higher than the first half of 2009. Search advertising remained the largest form of online advertising, accounting for 47 percent of first-half spending — $5.7 billion, an increase of 11.6 percent compared to the first half of 2009 ($5.1 billion).

Search has remained the leading format since 2005. Display advertising (e.g., banner ads, rich media, digital video) totaled more than $4.4 billion in the first six months of 2010, an increase of nearly 16 percent over the same period in 2009. Digital video continues to experience record growth, this year achieving the highest half-year performance ever and up 31 percent over first half 2009. 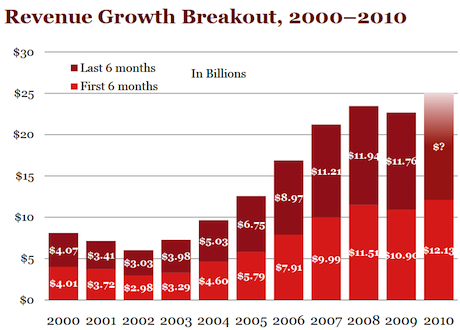 Online ad spend is on course to reach $24 billion in 2010, which would make this the industry’s biggest year since the IAB began conducting annual spending research in 1996.

Conversation mapping: The new rules to win in search and content marketing

Analytics Conversation mapping: The new rules to win in search and content marketing