Each holiday, it gets more difficult to decipher the various reports we receive, as more and more companies share their insights. Research and e-commerce companies give us a glimpse at the greater picture, though they do so through analysis of the data to which they have access. As a result, their figures often differ.

Does this mean one is “more correct” than another? No. It means that viewing the collection as a whole, rather than relying on any one source in particular, can give a clearer idea of which channels, strategies, and tactics were most successful over the given period of time.

For more information on the methodology, sample size or data used by any one company, please click through to read their full report (where available). Here are the highlights from each: 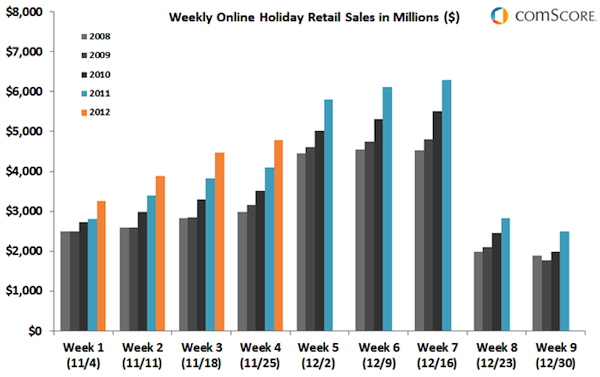 Cyber Monday reached $1.465 billion in online spending, up 17 percent versus 2011, representing the heaviest online spending day in history and the second day this season (in addition to Black Friday) to surpass $1 billion in sales, according to comScore.

Other findings from comScore:

“Retailers are not only investing more dollars online, but they are doing it earlier in the consumer buying cycle,” said Matt Lawson, Vice President of Marketing at Marin Software. “Consumers increasingly rely on online alerts, ads and reviews to inform their buying decisions and advertisers are looking to keep ahead, especially during the critical holiday season.”

*Marin helpfully pointed out in their blog post outlining these insights, “The ‘creep’ as it’s used in this blog post is in relation to “spreading” or “growing” – not the “creep” you may encounter at your company holiday party.” For that clarification, we thank them. Online traffic on Cyber Monday increased 11 percent YoY, as the top 500 retail sites received more than 206.8 million total US visits. So far this past holiday week of online traffic from Thanksgiving Day to Cyber Monday to retail sites is up 8 percent for 2012 vs. 2011, wrote Experian’s Matt Tatham. Other highlights from their research: “Early browsing behaviors mirrored those of Black Friday quite closely. The only clear difference is that consumers chose sleep over shopping, as illustrated by the 25 percent decrease in browsing activities at 12AM,” wrote Akamai’s Elyssa Duboys. “Additionally, average page views dropped from 14.1 to 11, a decrease of 22 percent early Monday morning (12AM -4AM).”

PM Digital – More Searchers Does Not Translate to Sales Boost

Product Listing Ads (PLAs) were a big component of performance this year, according to PM Digital.

“Brands selling direct to consumer saw their trademark CPCs rise significantly, as click throughs were diverted from their trademark search ads to the image-pleasing PL ads shown right on the search results page run by their retail partners,” they told SEW. “PLA spend made up 10 percent of the search spend, and advertisers who ran on PLAs last year saw 100 percent YOY growth on those ad placements.”

“Shopping continues to migrate online, and U.S retailers saw their biggest fluctuations of the season to date on what most now consider to be the biggest days for online shopping: Thanksgiving Day and Cyber Monday,” said Aaron Goldman, Kenshoo CMO. They found that:

“Despite some news reports suggesting that Cyber Monday might be declining in importance, the day has once again set an online spending record at nearly $1.5 billion,” said comScore chairman Gian Fulgoni. “However, it is also clear that the holiday promotional period has begun even earlier this year, with strong online sales occurring on Thanksgiving Day and Black Friday. Now, we shall see the extent to which continuing and attractive retailer promotions are able to boost sales for the remainder of the week.”

How to utilize holiday season traffic for 2020's Q1 growth

Industry Kenshoo Trends Report - The state of search advertising in 2019