The Electronic Frontier Foundation's annual Who Has Your Back? report lauds a number of major companies for their efforts to help preserve user privacy and report to the public the extent of their cooperation with government groups.

The Electronic Frontier Foundation (EFF) is reporting that social networking and web service companies are making strides towards becoming more transparent with users.

In its annual Who Has Your Back? report, the online activist group lauded a number of major companies for their efforts to help preserve user privacy and report to the public the extent of their cooperation with government groups.

The report judged firms based on a number of practices, including publishing regular transparency reports, notifying users of government data requests and lobbying lawmakers for improved user privacy protections. Firms who met the criteria were given a star for the specific category.

Just two firms, Sonic.net and Twitter were able to earn stars across each of the six categories. A number of other firms, including Google and LinkedIn, were able to achieve five stars – Google’s only failure was a lack of data request notifications and LinkedIn fell short on litigation activities.

Microsoft achieved four stars in the report, as did WordPress. Apple and Yahoo earned just one star.

“We’re thrilled to see a growing number of companies publishing transparency reports, and we especially commend Microsoft and Twitter for publishing their first transparency reports this year,” the EFF said in its report. “We are also seeing a shift that we hope will be adopted across internet companies more broadly: two Internet companies — Google and Microsoft — have published figures regarding National Security Letters, secretive government demands for user information that are typically accompanied by gag orders.”

The group noted that a failure to earn a star in a given category was not always a sign that a company is lacking in its policies. Certain categories, such as defending users in court, were not applicable to every company tested.

Going forward, the EFF said that it hopes social networking sites and web application developers will continue to work to make sure that users are given protections and that data is handled responsibly when working with governments. 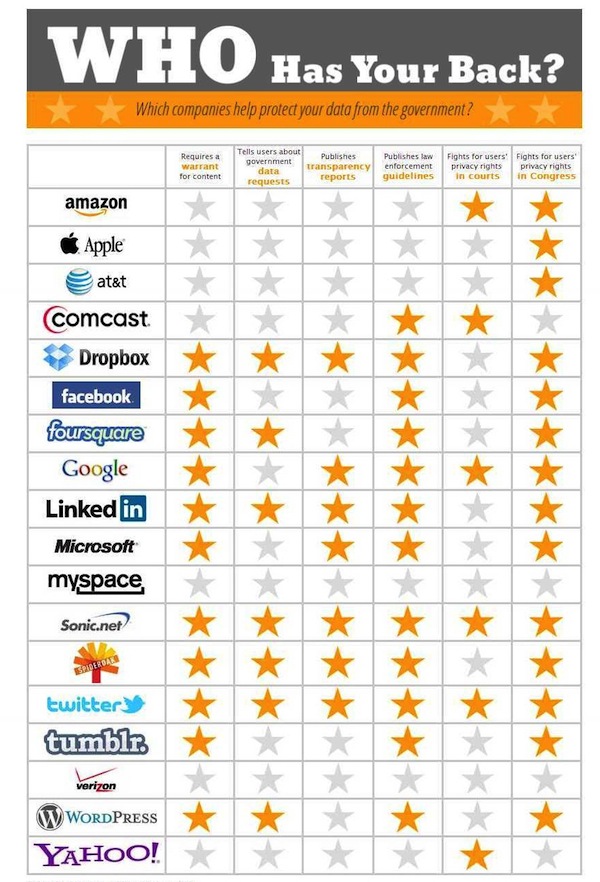