SocialBrands Expected to Respond Within an Hour on Twitter [Study]

Brands Expected to Respond Within an Hour on Twitter [Study]

New research shows the primary reason people engage with brands on Twitter is to show support or enthusiasm for the company, but when brands don't engage back, it can have negative consequences, including bad-mouthing the brand to friends and family.

The next time you think about putting off a response to that tweet your brand just received on Twitter – or not responding at all – think again. According to research put out by Lithium Technologies, more than 70 percent of users expect to hear back from the brand they’re interacting with on Twitter, and 53 percent want a response within the hour. 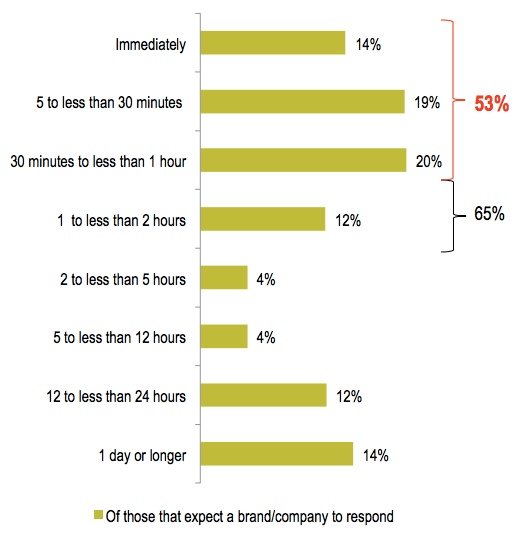 That percentage goes up when someone is issuing a complaint to a brand, with 72 percent saying within an hour is a reasonable time to hear back from them on the issue. What happens if Twitter users don’t hear back in a timely manner? The majority of respondents (60 percent) said there would be negative consequences to the brand, starting with telling friends and family about the experience (29 percent) and escalating concerns through other forms of communication (26 percent). Most survey respondents used Twitter to engage with brands in a positive way, however. Brand advocacy was a driver of engagement, including to give positive feedback about a brand (69 percent), to show enthusiasm (61 percent) or to recommend the brand (58 percent). While the majority of users said not hearing back in a timely manner does not change their perception of the brand or company itself, for some, those warm fuzzies can turn sour when engagement expectations aren’t met. In fact, 38 percent said they felt more negative about the company when they weren’t responded to in a timely manner. And oddly enough, it seems 14 percent like when the brand plays hard to get, saying they felt more positive about the company when it didn’t respond in a timely manner.