For those that thought that the digital marketing landscape would see dramatic change in 2013, the year didn’t disappoint. Last year I made 6 predictions, and it is time for me to give it another shot. But first, let’s see how I did last year!

Now it’s time for six predictions again this year, and the first one sets the stage for the remaining five! Once you’re done checking these out, let me know your predictions in the comments, or argue with mine if you like!

Just ahead of their 15th birthday, Google let the world know that it had released a new platform called Hummingbird. In fact, it had been live for three months or so at that point and few people had noticed. This all changes in 2014. 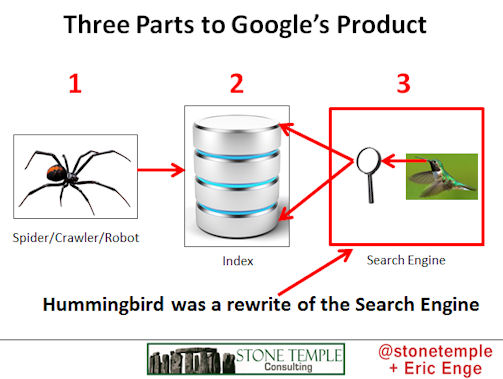 As a platform change, the near term impact was in fact quite small. The specific algorithms, such as Panda, Penguin, and basic ranking algos weren’t changed. Google restructured things so they can better bolt on new algorithms to the platform.

The bottom line? In 2014 we start to see the impact of Hummingbird. It is quite possible that all of the predictions that follow are all only possible because of Hummingbird.

Once bitten, twice shy! Or, older and a little wiser might be more appropriate. My 2013 prediction for Author Rank failed because I fell into that trap that is so easy for us all to do. Just because we can conceive of Google using a ranking factor doesn’t mean they will, or that it’s easy to implement: Implementing new algorithms is hard. Google needs to do an enormous amount of testing of any changes they make, and more often than not those simple changes break something else. In 2013, Google launched in-depth articles, a feature that seemed to be more driven by Publisher Rank than Author Rank: My 2014 prediction for this will be more cautious than I was in 2013. We will see one or more new changes to the search results related to AuthorRank and PublisherRank. We may also see the in-depth articles feature rise to more prominence.

What we won’t see however is some huge shift in the search results based on Author Rank. The use of this signal will likely come out as part of some specific features or scenarios. An example scenario might be an Author Rank specific ranking change in personalized results that shows up as some type of new presentation of authors you follow.

You might call this one a layup, and that would not be entirely unfair. Prior to Hummingbird, natural language search queries were specific to the Knowledge Graph. After Hummingbird you could start to see natural language queries visibly impacting other types of search results.

This screenshot is part of a sequence of searches that started with the [give me pictures of Tom Brady], and ended with [when did he start playing football]. However, the types of queries that work at this point in time are pretty limited. During the course of 2014 I believe we will see significant additions in natural language search capability. One reason for this is that Google sees mobile as a dominant trend, and believes that this will increase the demand for voice searching capabilities.

4. Impact of Google+ Grows, But Not in the Way People Expect

Google+ continues to grow as a social platform, but its adoption to date has been uneven. There are many categories where the discussions are rich and vibrant, such as science, food, photography, health and fitness, and many others. But, there are also other categories where the community is not yet as vibrant. Still, haters aside, Google+ is succeeding, and that sets the stage for this prediction.

The impact of Google+ on the SERPs will increase. Once again, we should expect moderation. This won’t be some type of sweeping change. I wrote about the impact so far in this article.

The main impact we already see from Google+ on the SERPs are: What will Google do to increase the influence of G+? I’d expect to see more G+ posts in the SERPs (even for people not following you) at a minimum. We may even see some new search features tested. For example, if there is a breaking news item, and there is an active G+ community discussion about it, maybe we will see that discussion featured in some way in the SERPs.

What we won’t see if Google Plus taking over the SERPs or remapping them in some big way. Google can’t punish people for not being on G+, because that would break search itself. But, they can do more with it, and they will.

I wrote the first draft of this post back on January 12th, and low and behold 12 days later Matt Cutts writes an article about guest posting to say Stick a Form In It. Fortunately, this position softened somewhat, and the upshot of it is that guest posting that is primarily for SEO purposes is in Google’s crosshairs in a big way. And so it should be.

So I could take a full point already for this, but since I did not get this post up prior to Matt’s article, I will not take the easy way out. Instead, I will offer up some thoughts on what parts of guest posting will take hits in 2014:

Based on Cutts’ post we already know is that Google will look dimly on guest posting for SEO practices in their manual reviews of link profiles, so the above expectations relate to potential algorithmic action by Google.

6. More Weight Placed on Having a Mobile Site Experience

We live in a world where mobile (tablets plus smartphones) is going to be more important than the desktop. This has already happened in online retail. We also know that Google cares deeply about the user experience – they don’t want to send users to sites that offer a crappy experience because it’s bad for their search engine to do so.

So yes, sites with no mobile implementation might take some rankings hits in 2014, at least when the user is coming from a mobile device. If mobile devices represent 20 percent or more of your traffic (and I think is pretty much every website these days!) then you need to pay attention to this. Cutts already discussed this in his keynote at Pubcon Las Vegas.

In 2014, it begins to have serious implications.

So there you have it. Another year’s predictions on the books. How do you think I’ll do? What are your predictions? Tell me in the comments below.