AdGooroo release research this week showing which brands were on top when it came to the top 50,000 keywords in U.S. Google AdWords. The announcement comes on the heels of a new mobile data offering by AdGooroo.

Are you taking advantage of mobile advertising like Amazon, Best Buy, and Bank of America? AdGooroo this week highlighted the top advertisers in mobile search based on impressions for the top 50,000 keywords in U.S. Google AdWords. 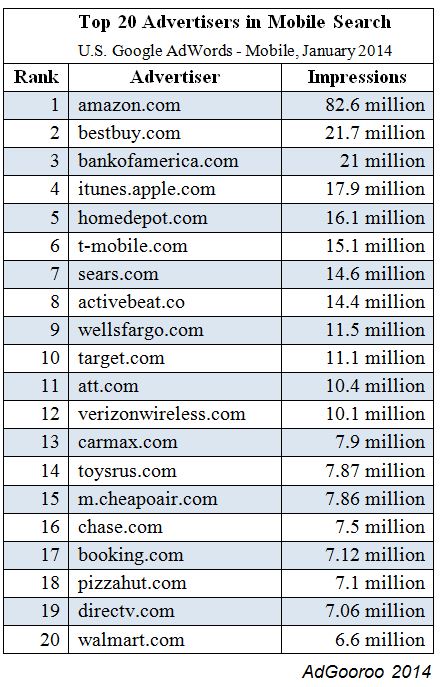 The same was true for others like Wells Fargo, Chase, and Pizza Hut:

Last month in January, data coming from The Search Agency showed cost per click was down in mobile compared to desktop/tablet for many industries, yet desktop was on the rise.

The AdGoroo report comes on the heels of a new offering that adds mobile search data to its SEM Insight tool, which “enables advertisers to gain a competitive advantage in paid search via near real time insight into their competitors’ campaigns,” the company said in its announcement.

3y Pius Boachie
Mobile-First Indexing: Everything we know, and how it could affect you

Mobile Mobile-First Indexing: Everything we know, and how it could affect you

Mobile How to optimise your m-commerce site for search