SocialTwitter Reveals Which Tweets Get the Most Engagement [Study]

Twitter Reveals Which Tweets Get the Most Engagement [Study]

Twitter conducted a study of more than 2 million tweets to find out which elements in a tweet actually garnered more engagement. The data was then broken into segments like news, TV, sports, music and government to show what worked in each sector.

We’ve seen third-party studies on what makes a tweet succeed, like this one, for example. But Twitter went ahead and did a study of its own, looking at more than 2 million tweets from verified accounts in the United States. What it found was that adding video, links and photos all result in “an impressive boost in the number of retweets,” Twitter said.

Twitter segmented the results by sectors like TV, news, government and politics, sports, and music; not every sector showed the same results.

Overall, the most effective tweet components across all verified accounts were:

You can play with the data here, in this interactive table:

Let’s look at a couple sectors. For the news segment, photos garnered the most retweets. What this data means, said Twitter, is if a journalist normally gets an average of 100 retweets per post, for example, a photo could drive that average to 127 retweets per tweet.

Twitter pointed to examples of how news organizations leverage images in their tweets, like during breaking news events or when journalists connect with their audience in interestng ways, like this: When it came to the TV industry, not surprisingly, quotes were the main driver of retweets, as fans engaged with their favorite TV personalities via Twitter. 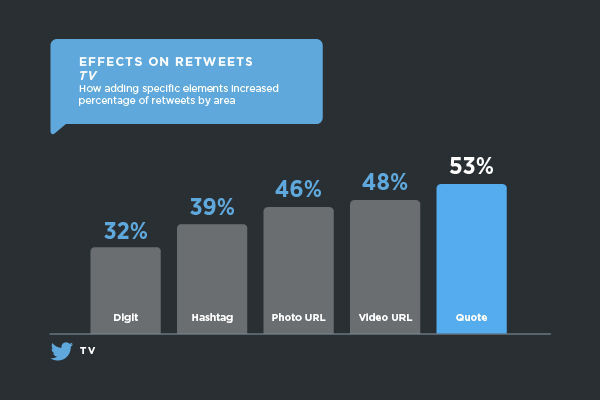 What about those in government and politics? From Twitter:

Photos were more effective for verified users in government and politics than in any other area, with a significant bump in Retweets — 62 percent higher than they would expect to receive normally. Let’s say @politician normally gets an average of 100 Retweets per post. A photo would see them getting an average of 162 per Tweet. Twitter illustrated how some political figures were getting creative with their images: There’s more data and tips in Twitter’s study; check out the music category or sports category while you’re in there.