When you Google the word 'Google' in Egypt, a Cairo repairman's Google+ page is the first hit, even before Google itself. How did this happen?

A friend of mine was searching for the keyword ‘Google‘ on Google’s Egyptian site when he found something very weird and told me to check it out for myself. The result drove me crazy for seven hours and I couldn’t find any reasonable explanation, so I’m opening up the floor for others to weigh in.

This is who comes up as the number one spot when you search for the keyword ‘Google‘ from any Egyptian IP address: 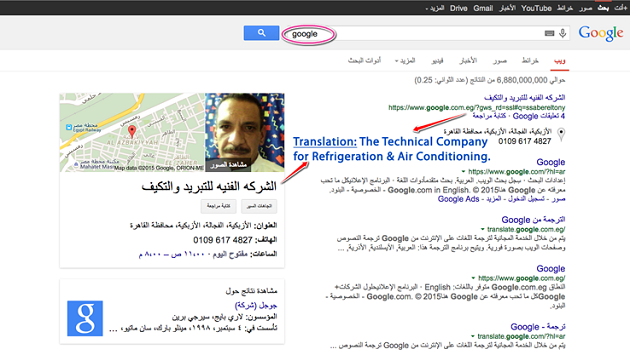 This Egyptian HVAC Technician is ranking number one in organic search results with a Google Places listing that outranks Google’s own knowledge graph snippet. His business name doesn’t even include the keyword, nor is it in any way related.

At first, I thought maybe these are some personalized results (still not a reasonable explanation). I tried turning on incognito mode and still received the same results.
That wasn’t enough for me to believe it, so I asked four friends to search for both the keywords ‘Google‘ and “جوجل” (Google in Arabic letters) and tell me if they too saw this strange listing. After checking, they all told me he is ranked number one for ‘Google‘ and number two for “جوجل”.

Some of them even tested desktop and mobile search and received the same results. Now that I knew this was a country-wide ranking, I told myself it must be a short-term “glitch”, rather than a consistent ranking. However, if you click on the “see photos” link under the guy’s photo, you will go to his Google+ page, which publicly declares how many views each page has received.

So, I clicked to check the number of views and I was shocked again. His page had received 3,550,628 views, which is a sign that his top ranking spot has been there for a while.

By the way, he doesn’t post anything interesting, just some photos of the appliances he could fix. And as Google+ is among the least-used social networks in Egypt, there is definitely no way that he could have got millions of views through organic reach on the network. Note: It took me around 45 minutes to write this post, during which his page received an extra 86,000 views after I took this screenshot. The last time I checked it was 5.2 million.

I know there is no such thing as a “flawless algorithm”. However, why would Google think that this HVAC technician’s page is the most relevant thing to show when people search for Google’s exact-match brand keyword?!

I actually believe that “Google” is the most difficult keyword to rank for. Nobody should be able to outrank Google for their own name on their own search engine. It is like the only thing that holds “the matrix” from falling apart. At least for SEOs.

I spent a couple of hours trying to find a link between this listing and the keyword “Google”. Here is the only thing I was able to find; it looks like Mr. Saber entered this page in the Website URL field on his Google+ profile. It is just a link to a Google Search for his Twitter handle. Could this be the reason? It shouldn’t be.

After hours of confusion, I decided to contact Mr. Saber to see if he even knows that he is outranking Google. I got my phone, called him and I have to say; I will never forget this call for the rest of my life, he’s a funny man!

Here’s how it went:

Ladies and gentlemen, I have found my master. All hail the king. He is more “Google” than Google itself.

I will keep updating this article with any reasonable explanations that you suggest. Here are but a few so far:

This explanation was provided by someone who asked me not to mention his name. The link:

Here is the link on Google+ that is likely causing everything:
< a href=”https://www.google.com.eg/webhp?sourceid=chrome-instant&ion=1&espv=2&ie=UTF-8#q=ssabereltony” target=”_blank” class=”d-s” tabindex=”0″ rel=”nofollow contributor-to”>google.com.eg < /a>

I think the rel=”contributor-to” might be affecting something, as well. I didn’t even know that attribute value existed. I’m not sure if you can manually set that in Google+ when setting the URL or how that value is determined. This technique can probably be applied to other sites, so hopefully Google gets this fully understood and fixed.

Update No 2: Some People are Seeing Another Weird Listing

Seven fellow Egyptians have posted screenshots of another bizarre listing showing up for them. It is for a place called “The International Market” which is a market for trading fish and poultry.

Here is the interesting part:

This place doesn’t have a Google+ profile associated with it so I searched for it on Google Maps to get a more detailed snippet. Guess what? They are using a Google.com.eg link in the website field. Just linking to a Google search for their own name like Mr. Saber did. You can see it below: I think this gives a lot of credibility to the “contribute-to” scenario. Originally I thought this could be the only possible reason, but it just wasn’t believable enough. Now, I think It is.

So it looks like all you have to do to outrank Google itself is to change the website URL in your Google+ profile. Without an official update from Google we will never know for sure.

I had a Twitter conversation with Abdelrahman Khalid, who works as “SEO Consultant” for Google, according to his bio. Update No 4: All Hail the Now Famous King of SEO

This story had gone viral. Mr. Saber is like ‘Man of the Hour’ in Egypt. He is on newspapers, news portals, and even TV. In the course of 24 hours, 38 local news websites published his story. When you search for “جوجل” (Google in Arabic), the three results you see under “In the news” are all his. The guy is practically dominating the keyword.

Update No 5: His name is Saber El-Toony!

It looks like Google has fixed the issue. I noticed that Mr. Saber’s listing stopped ranking for the keywords and the “google.com.eg” URL in the website field on his Google+ page has now been removed. I don’t think he would remove it himself because I told him it might be the reason for his rankings. I tried to confirm this with him, but his phone was off. 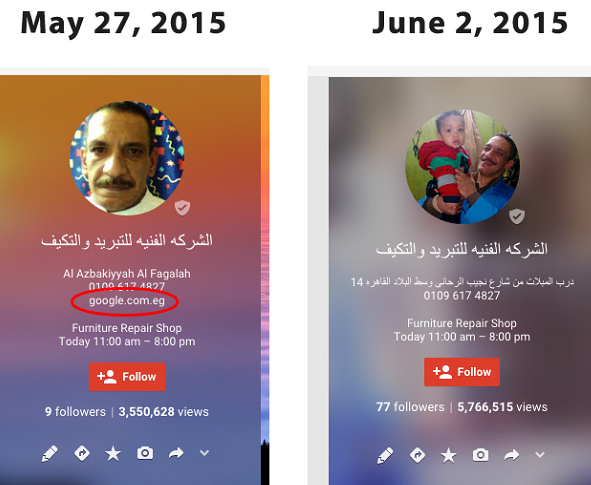 The issue may be solved for now, but the myth still remains. We will never know for sure the exact reasons behind it without an official statement from Google. I know that all of our findings until now say it was the google domain in the website field, but this shouldn’t be enough to rank for such keyword. And after all, it is a “nofollow” link which means, in theory, that Google doesn’t consider it for ranking.

Over the weekend, I noticed that Mr. Saber is back at the top when searching for Google’s brand name keywords. I checked his Google+ profile and found that a google.com.eg URL is back in the website field.

I called him and he confirmed that he noticed that Google changed his website URL so he put it back and was instantly back at the top. He also told me that he is doing two TV interviews tomorrow. I’m eager to hear your thoughts about the wonders of this ranking and any reasonable explanation about how this could be – feel free to do so in the comments section below. Or hit me up on Twitter @eyadnour.

Eyad Nour is an obsessive-compulsive marketer from Cairo. He is also the founder of BlogStart, a community that connects bloggers to start win-win relationships. It is going live next August, with the first cloud-based content marketing workflow that is actually free for life.

3w Kris Jones
Is it time to switch to a new SEO tool?

SEO Is it time to switch to a new SEO tool?