This guest columnist looked at Google Trends around summer barbecues to determine once and for all, how people like their cook: ribeye, medium, with Chimichurri sauce, and at 7 p.m.

Summer, and specifically the Fourth of July, is one of the top three most popular times of the year to eat steak. With the sunshine out, and family and friends over to celebrate the longer daylight, what better food is there to eat than steak? None, says this meat eating SEO guy.

With the new Google Trends update released on June 17, we’re now able to get much better insights into how people are seeking information and precisely when they’re doing it. I’ve done some digging around to answer various questions about how America consumed steak over the Fourth of July weekend.

How to Cook a Steak?

About to throw the meat on the grill, America checked one final time for the best way to cook steak. Searches peak at around 7 p.m., as people were rushing to line their stomachs just before the fireworks displays kicked off. 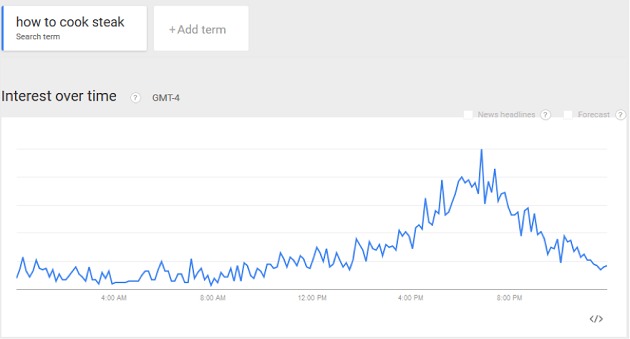 The French do say that steak is best served medium-rare, but America disagrees. Searches for how to cook a steak perfectly medium dominated throughout the afternoon of the Fourth. Ribeye marbling is well-known to produce the best flavors and America agrees. Filet mignon wasn’t far behind, but the surprise was the popularity of flank steak, which continues to grow year after year. Which Sauce Should Accompany Your Fine Meal?

Volume for Chimichurri dominated throughout the day, peaking in the early afternoon, as everyone rushed to get everything prepared in advance of the evening. 4 Lessons for Perfecting Your Fourth of July Steak Next Year

Jos heads the SEO team for DigitasLBi North America, after 10 years of working in SEO with iProspect, Ogilvy and i-Level. Originally from London, Jos moved to New York six years ago and has since become a Giants fan.

How to enhance your ecommerce branding strategy with Google Trends

Analytics How to enhance your ecommerce branding strategy with Google Trends