SEOHow the use of sub-domains can harm your search rankings

How the use of sub-domains can harm your search rankings

Sub-domains are a common tactic for lots of brands, but as the examples will show here, this strategy can lead to conflicts.

Sub-domains are a common tactic for lots of brands, they may have different sites for various countries for example, or have variations on the main brand offering.

As the examples will show here, this strategy can lead to some conflicts between the main domain and its sub-domains if not applied correctly.

In these examples, we’re seeing internal cannibalisation, as Google is undecided on the best page to deliver to searchers.

Alpharooms.com: US vs UK domain

Here’s a chart showing Alpharoom.com’s rankings for the term ‘hotels in Tenerife’ for the past seven or so months.

The page indicated by the pink line is the UK version of the page. The problem is that, though it has ranked well for several months, it’s not consistently there and since early July, it’s been down past position 100 on Google for much of the time.

For the periods it hasn’t been in the top 10, the usa.alpharooms.com version of the page has been ranking: If we combine the two charts, we can see they have been switching rankings for the entire period. Now, this hasn’t severely impacted the rankings in the sense that at least one landing page will show relatively highly for the term, but it may do in future.

What it does mean though, is that at various times US users are seeing the UK version of the page, and vice versa. They may be seeing hotel prices in the ‘wrong’ currency, something which could deter users and perhaps give them the message that they’ve reached the wrong page.

In this case, Old Navy which is a subdomain of Gap.com, is battling its parent domain for Google rankings. Both domain and sub-domain are competing for various terms.

For example, on the term ‘dresses’. The pink line shows rankings for Gap.com for that term up to September this year. (Note: it’s also competing with its own pages for the term too, with four different URLs ranking in this period). The gaps in the rankings are (you’ve guessed it) for oldnavy.gap.com. Here’s the two together – the yellow line shows Old Navy’s rankings for ‘dresses’. 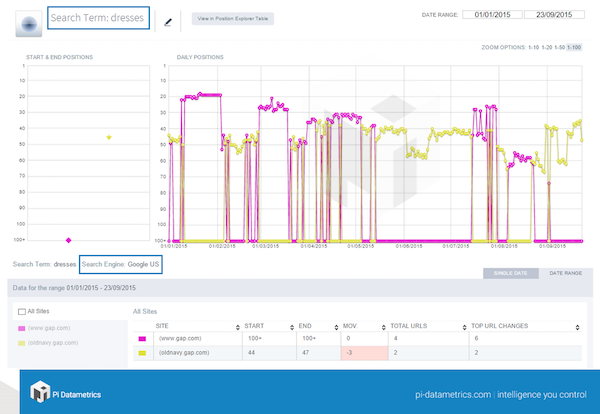 Neither have made it onto page one of Google, and this is obviously a very competitive term. However, the conflict appears to be harming the rankings for both sites.

Also, given that Gap.com seems to stand the better chance of ranking for ther term, it should be indicating this to Google.

We can also see this for the term ‘summer dresses’. Here, Old Navy ranks well for the term for the majority of this period. However, it periodically dips out of the rankings, to be replaced by a competing page from the main domain. ASOS: US vs. UK domains

UK retailer ASOS has a sub-domain for its US customers, but is experiencing similar issues as Gap and Alpharooms.

Here we can see that the main and US sub-domains are competing for the term ‘leather coats for men’.

The pink line shows the main domain, the yellow the rankings for us.asos.com. For much of the period shown here (January to September), the main domain has been in the ascendancy, meaning that visitors arriving at the site via this term are seeing what appears to be a UK site with prices in Pound sterling. That may be enough to deter them from shopping on the site.

In the last few months, the US domain is performing better for this search, which may suggest that ASOS has taken action to solve the issues.

The New York Times example here is similar to the Mail Online example I referred to in a previous post on internal linking. Different sections of the site are ranking for the term ‘news on financial markets’. One (the pink line) is a topics page, the other is a news article.

The publication of the news article in June caused the ranking of the topics page to drop and, though it recovered afterwards is hasn’t consistently ranked for the term.

For situations like this, the New York Times needs to decide which of the pages it would prefer to rank, and indicate this through linking.

It may, for example, decide that, while news traffic is temporary, a topics page could attract more valuable traffic over time, and therefore link to that page from related news reports. USA Today has at least three sub-domains competing for rankings on the term ‘Kylie Jenner’.

As we can see from this Google Trends chart, it’s a high-traffic term, even higher than Taylor Swift searches at times. 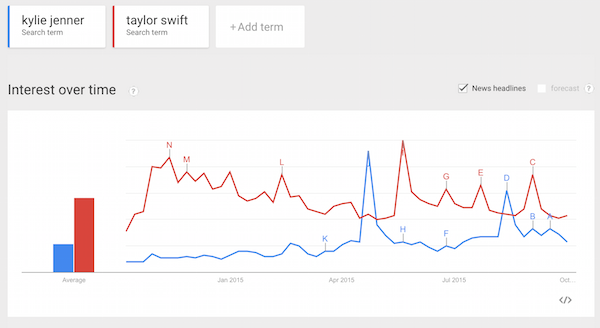 This chart shows the rankings for the site’s ‘Entertain this’ section, perhaps the natural home for celebrity news on USA Today.

However, this sub-domain isn’t able to rank with any consistency, and more than 10 articles rank for the term in this period. Some reached the top few positions, most didn’t. Now we have another sub-domain, the FTW sports section, which had a brief moment in the sun thanks to a NBA related Kylie Jenner story. However, the main competition for the entertainment section comes from the main domain, though it doesn’t rank as highly for most of the time. 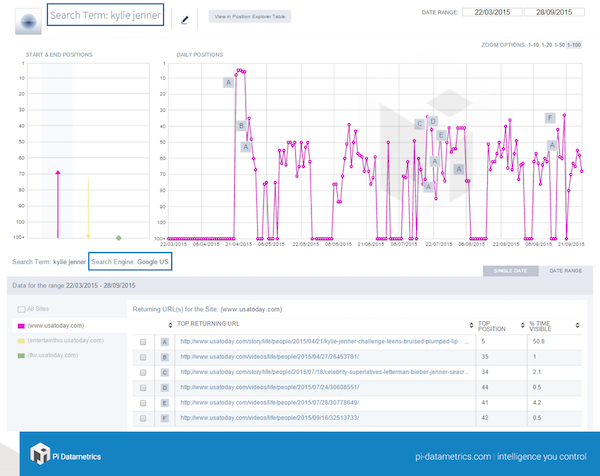 If we put all of the lines together, we can see the full picture. USA Today isn’t ranking in the top 10 for this term for the majority of the six month period shown. So what should USA Today do?

Well, it’s hard to co-ordinate a strategy for every mention of such a ubiquitous celebrity, but some organisation is required here.

USA Today could decide that it wants its entertainment section to be the home for Jenner content, and create a hub page where all this content sits. It could then link the majority of mentions of KJ to this hub page, which sends a strong signal to Google to favour that page fro the keyword.

What can sites do to avoid these conflicts?

I suspect that a common theme behind these issues lies in communication (or lack of it) between departments. For example, the team creating content for Old Navy’s menswear section may well be completely separate from Gap’s.

This means they are creating content without any idea that they are competing with their own website, not just those of rival retailers.

In general, only one site will rank for each term on Google, so Gap needs to decide which of the two to prioritise, or perhaps to reconsider the strategy of using sub-domains.

What is needed in each case is a co-ordinated strategy and these departments need to communicate with each other.

Individual examples may seem trivial, but if this internal conflict is happening across a broad range of keywords it can have a serious effect for businesses.

SEO Get more subscribers with these seven podcast SEO tips

2m Kevin Payne
Research: The integration of SEO and PR