ContentGoogle Posts: Growing under the radar

Google Posts: Growing under the radar

Google have now rolled out their Posts function for small businesses with a Google My Business account. But how do Posts affect click-through, ranking, mobile and social presence? We look at the facts.

Google Plus has risen from the dead! No we’re only joking, that’s highly unlikely.

Google have now rolled out their Posts function for all small businesses with a Google My Business account.

No idea what Posts are? You’d be forgiven for being confused, managing your business information on Google calls for some deciphering of the difference between Google My Business and Google+, which can lead to some serious head scratching.

Hence why we are taking the time to explore what Google Posts are and what they mean for small businesses (and celebrities, big businesses and Twitter).

Google has also refrained from making a big song and dance of Posts – so the amount of information out there is particularly limited on this occasion. To add to the confusion, the term ‘Google Posts’ or ‘Posts on Google’ is not actually the official name given to this feature, as per some of the Google search algorithm updates, Posts has been named as such by the wider community.

The term Google Posts was presumably born out of the language used by Google when describing the feature, e.g ‘post with Google’.

Let’s start from the beginning: What are Google Posts?

Originally tested during the 2016 US elections, Posts offered candidates the ability to submit updates that would appear directly in the search engine results pages (SERPs) and Google Maps.

These posts were also categorized with dropdowns, further helping users to access critical information. In 2016, selected businesses and individuals, including musicians, were used to trial Posts. Apparently these test results were good enough for a wider roll out in 2017. The posts appear as cards in the SERPs with various calls to action including ‘more’ and social sharing to Facebook, Twitter and Google.

The big G state that:

“Posting on Google is a new way to share relevant, fresh content with the people who are searching for you. Use image, videos and even animated GIFs to engage your audience, and ad inline links to drive traffic to specific content. This enhanced format allows searchers to hear directly from the primary source – you – and complements existing results from across the web.”

How to use Google Posts

First things first, if you’re based in London like us, Google haven’t fully rolled posts out to everyone so you have to join the waiting list. In our opinion it is definitely worth registering. You can use Google Posts in a variety of formats including events (with dates and times), image based, video, animated GIFs and text based posts.

Google say that each post will be removed after 7 days, after the date for an event has expired “to ensure that posts are timely”

In a case study last year on Search Engine Watch, Rebecca Sentance noticed that Google Posts were appearing for search terms such as ‘engagement rings Buffalo’, i.e non branded search terms. This was particularly exciting, however upon investigation it would appear that Google has now backtracked on this decision to have Posts.

Probably a good thing – it would be a safe bet that the underbelly of the SEO world would look to spam Posts should they appear for transactional terms. Regardless, as discussed in a previous blog post, SEO is more than just onsite, content and links.

Great SEO also takes into account the whole user flow, including improving click-through rates from results pages, which Posts should contribute to.

We will have to wait for a wider roll out to see the real effect that Google Posts will have on CTR. However, it does not take a huge leap of faith to bet that, if used properly, Posts will draw the eye and add to credibility and subsequently improve CTR.

The fact that you can incorporate autoplay GIFs into Posts that appear in search adds another dimension to your appearance in the SERPs. We believe that early adopters could gain a critical edge over competition in the SERPs, especially for those in 2nd, 3rd or 4th place who could differentiate their listing from those above them.

Finally, let’s face it, Google has an assumed level of authority with most internet users. That’s what makes them so profitable – people trust Google’s search results. They may not trust them as a brand, but that’s slightly different.

Accompanying your Google Posts is a nice blue tick next to your name, giving your brand a boost in terms of social verification. Google has endorsed you. If that doesn’t have an effect, then we can all forget about the influence of status in all walks of life. This is where there is a big difference for Posts. The long and short of it is that Posts are almost immediately viewable when scrolling on mobile (just under the maps result) whereas for branded search on desktop they are on the right hand side Knowledge Graph, below all of your other GMB information. 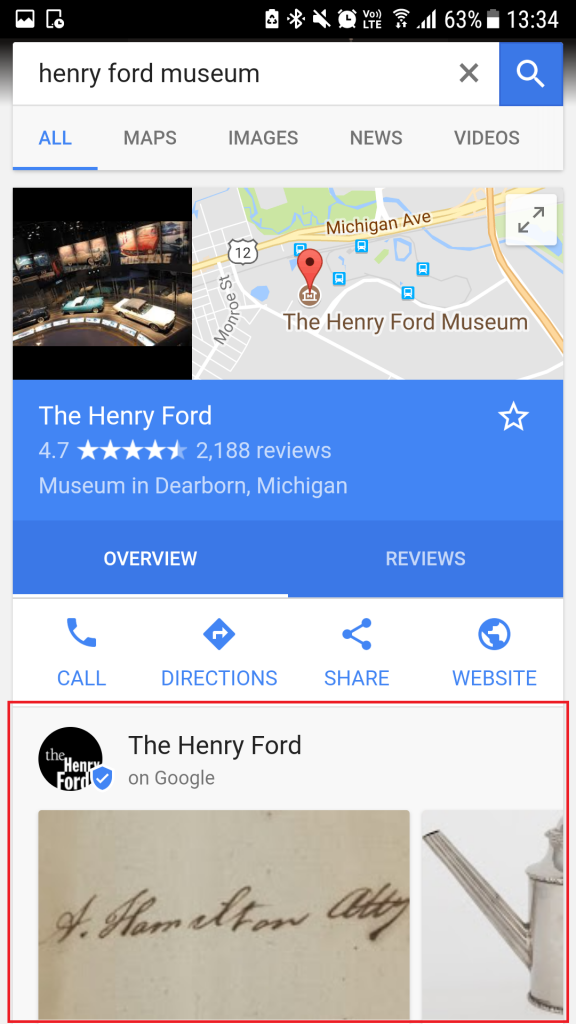 With Google’s push towards mobile-first indexing and AMP, Posts take a prominent position in the SERPs on mobile. Does this dictate that they will be considered a ranking factor? Not necessarily. However, expect businesses to receive higher levels of engagement and CTR from mobile when compared with desktop, especially for branded searches.

On the other hand, this advantage could be neutralized for non branded searches where the Post carousel is appearing directly beneath the search result, rather than under the business’ GMB profile.

How do Google Posts influence your ranking?

Considering the almost stealthy roll-out of Posts, we do not expect Google to comment on whether Posts will be taken into account as a ranking factor in search. For the moment, therefore, we would recommend concentrating on utilizing them as a feature to improve CTR, and therefore traffic, to content.

Posts are certainly not a social network in the traditional sense, when compared with the major platforms such as Facebook, Instagram, Twitter and Snapchat. Furthermore, we only need look at the ambiguous information out there on how social media may or may not affect ranking ability to guess that Google will not be commenting on the influence of Posts on SERPs for some time – if ever.

Are posts a spin off of Google Authors?

Posts appear to be somewhat of a spin off of the now defunct Google Authorship experiment, but with more functionality, i.e. the ability to advertise events in Posts. Much like Google Authorship, Posts will provide almost instantly indexable content and another dimension to search results.

Businesses will be able to drive traffic through search results to specific pieces of content or key calls to action from Posts, adding further options for users compared with the more standard main search link or associated sitelinks.

Again, we will need to see this roll out fully to see the impact on search results, but it is an interesting conundrum for Google. Currently big brands will tend to have Google’s ‘Top Stories’ and a Twitter carousel appear in search results. Add Posts to this equation and it raises interesting questions. Which takes priority? Content published directly to their GMB page, or Twitter/news outlets?

One would imagine that Google would look after their own interests, but their recent record €2.4 billion fine by the EU for essentially providing biased Google shopping results may influence their decisions on this matter.

Posts do seem to compete more directly with the Twitter carousel due to their time-sensitive nature, which is not exactly great news for the already presumably very sweaty and sleep deprived team at Twitter. Especially considering the language used on Google’s page explaining Posts: “Your Presence on Google, Fresher than Ever”.

We are actually quite excited about the potential of Posts. It adds another dimension to our role as SEOs, and we can see early adopters using it to significantly boost content marketing efforts.

Interestingly – and a topic which has been briefly touched upon by Search Engine Watch – the way in which businesses utilize Posts could be a substantial influencing factor on their effectiveness. Businesses will have to be conscious of whether they use it to promote new products, events, provide key information (e.g guides), or a blend of content.

First impressions count, even before the user has clicked on your search result. Subsequently, early adopters should look to define their strategy for Posts quickly rather than being an early adopter for the sake of it.

Effective SEO copywriting hints to increase your traffic in 2020

Content Effective SEO copywriting hints to increase your traffic in 2020