Video Ad Sequencing (VAS) is a recent addition to the Google Ads video campaign types that allows advertisers to, “…tell your product or brand story by showing people a series of videos in the order that you define.” But it is really a lot more.

Video Ad Sequencing can be used to take your target audience on a video journey based upon, to a limited extent, their behavior. By telling a story VAS lets you drive deeper awareness, engagement, and consideration.

Let’s say you want to let people know about “Five key elements of your product” and why it makes you better than the competition. With VAS, you can effectively ensure that potential customers see each video, in a set sequence.

We used VAS with one of our clients which had one long-form video that was just too long to capture the short attention span of users on YouTube. So, instead, we split the ad into five short vignettes, each with a quick intro and value-prop within the first five seconds (which is the non-skippable length of a video ad) to ensure our message got out before a user could skip the full 30-second video. We then set up a VAS campaign that would show these ads, in sequence, so that users would see the full story and all of the value that the product could offer.

What’s great about VAS is that you can go beyond a flat sequence and actually vary the content a user sees, depending on how they interact with each video in the sequence. For example, let’s say a user skips your first ad, rather than having them continue through your sequence, you can say, show them an alternate video outside of your sequence. If they skip that too, then you drop them entirely out of the sequence.

Another potential usage of Video Ad Sequencing is rewarding users for watching your content or calling out when they skip your videos. You can show videos to users that skipped your prior videos in sequence, meaning you can show them alternate content such as alternate value propositions, drop them out of the sequence, or even directly address with the audience that they skipped your prior video but you still really think your product is right for them. Alternatively, if a user views your first video, you can put them into a sequence with longer-form content for the second video, effectively creating exclusive content that only those viewers get to see.

Things you must know

The settings allow for you to dictate what content a user sees after they see an ad (impression) without watching, viewed an ad (watch the full video if shorter than 30-seconds or at least 30-seconds if the video is longer), or skipped an ad.

What you end up with is a flow like this 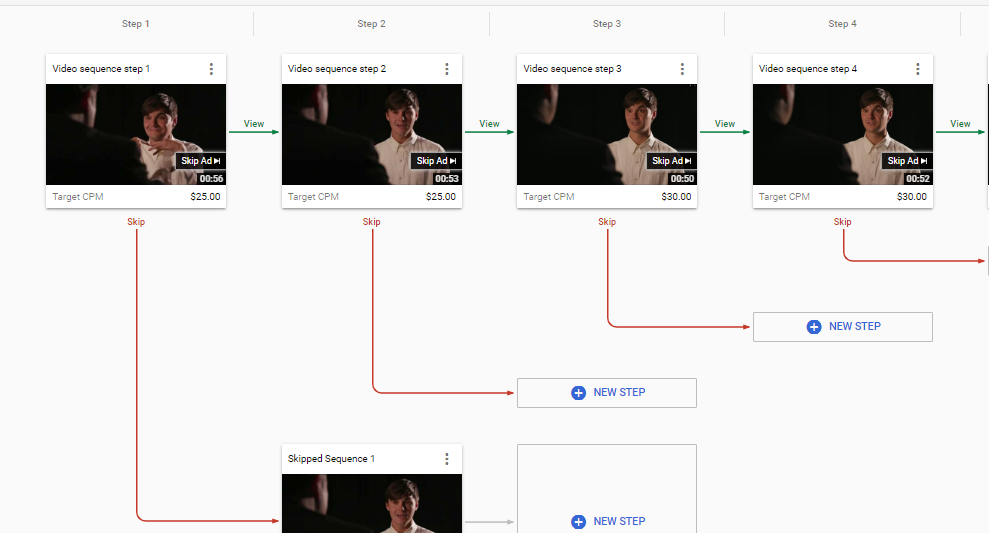 If you are looking to try out video ad sequencing keep this in mind – you are limited to target CPM or Maximum CPV bidding and you cannot target by content.

This means no specific placements, topics, or keywords (you can exclude them though). You can really only target them by demographics and target audiences. YouTube does not currently allow custom affinity or custom intent audiences so you are stuck with life events or In-Market Audiences. Google recommends testing sequencing alongside brand lift studies, which basically means: “This campaign can spend a lot if you let it.”

Ad formats include the following

A combination of the above

I would also strongly recommend mapping out your sequence before-hand. Every step of a sequence is set as a new ad group in the campaign, so it can get big and messy quite quickly.

It’s also good to know how you want to deal with the different interactions at different steps in the sequence. Just because a user skips one video, doesn’t mean they won’t watch another and get back into sequence. But similarly, if a user skips your video(s), do you really want to keep showing them ads in the sequence they care nothing about? Maybe at that point, you show them a totally unrelated tried-and-true video and then drop them out of the sequence.

My testing with Video Ad Sequencing so far has been limited, but I am very excited about the opportunity to keep working with several of our larger clients on sequencing. It is a really powerful tool that Google has shown can grow brand awareness and consideration.

Next, I’ll have a guide for setting up your first video ad sequence should you still need help.