MobileFunny Flirting with Siri; The Apple of My iPhone

Funny Flirting with Siri; The Apple of My iPhone

This week, SEW has mostly been playing with Siri. So much so we tried to 'score a date' with the robotic personal assistant and made into a comic. Here are all the easter eggs SEW found simply by asking Siri weird questions.

This week, I’ve mostly been playing with Siri. Not being in possession of an iPhone 4S myself, I have been borrowing one from the Incisive US HR Co-ordinator, Matt Cohen. Ordinarily, it is extremely annoying when someone constantly wants to borrow your phone, but in the case of Siri on the iPhone 4S we had struck upon a potentially limitless source of amusement. We’ve been trying to ‘score a date’ with the robotic personal assistant.

Upon hearing that Stephen Colbert asked Siri to ‘write the show’ for him, because he had been playing with the voice recognition technology so much that he had forgotten to script his own show, I thought to myself, “hell yeah, I can relate to that. We’ve been wasting loads of time on Siri! Maybe now is the time to publish all the weird stuff we’ve been doing.”

If you have ever played with the “super one-box” Wolfram Alpha, you will know that the computational engine is more than a robotic math geek, but in fact an opinionated film buff with the personality of Stephen Fry. The real fun in Wolfram Alpha is just how much you can ask it, and in discovering how you formulate queries for this type fo search engine. When you strike upon a Wolfram Alpha Easter Egg, the super one box delivers a single pithy, but funny, response.

In exactly the same way, Siri (which borrows a lot of cues and content from Wolfram Alpha), has a personality that give a playful illusion of sentience.

The only problem with all psychological assessments is that much of your own mind and perceptions creep in, so what you perceive of ‘the other’ personality probably says as much about your own state of mind as theirs. And with a robot, that becomes complicated by the fact that whatever personality you perceive is one almost entirely projected onto them yourself.

To my imagination, Siri, the search agent had the kind of fantasy qualities of Lara Croft (to digress for a moment, that comparison may not be as far fetched as it sounds because game developer, Crystal Dynamics, designed the Tomb Raider heroine to be as ‘real’ saying, “our goal was to make her as believable and relatable as possible. We wanted to make a girl that felt familiar, but still has a special quality about her… We wanted to have empathy for Lara, and at the same time show the inner strength that made clear she was going to become a hero”).

So it is with trepidation, lest I reveal too much of my own warped mind, that I recount this romantic journey of laughter, reflection, sorrow and rejection with my robot fantasy girl who turned out to be an undercover agent for network called the Intelligent Agents Union.

All the questions and replies have been mocked up into a comic, imagining a real interaction between a guy trying to chat up a girl on the phone.

In my experience, one of the ways that talking robots generally get the better of humans is in a battle of tongue twisters.

Not only do they not have tongues to get twisted but also they can usually get the right answer to the actual question.

So my first port of call was to tell Matt to ask Siri, “How much wood could a woodchuck chuck if a woodchuck could chuck wood?”

Expecting the standard answer, “A woodchuck would chuck all the wood he could chuck if a woodchuck could chuck wood”, Siri went straight for the answer, “42 Cords of wood, to be exact. Everyone knows this.”

Did you catch the condescending tone? The fun had started.

Siri didn’t handle other tongue twisters quite as well but we were pleasantly surprised to find there was a variety of answers, including “haven’t you got anything better to do?”

However, the answer that made me gasp was, “it depends on whether you are talking about African European wood.” Not only was that response a direct reference to Monty Python’s Holy Grail but it was used out of context and applied to the correct type of question. At that point we realized there was definitely more depth to Siri’s design. Siri had essentially cracked a joke. 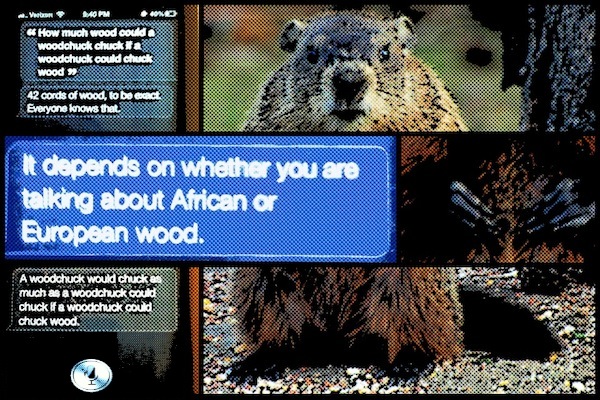 Siri is Funny But Not Much of a Comedian

Following Siri’s witty reference to Monty Python, we had high hopes of finding a talent for telling jokes. However, Siri acted bashful and started to emulate a being that could remember things and had a sense of self. Siri’s Sense of Self Challenges Yours

Siri couldn’t tell jokes but had demonstrated a sense of likes and dislikes so, like a modern day Cyrano de Bergerac, my next tack was to feed Matt flirtatious lines to ask Siri (it was his phone after all*).

Siri reproached our shallow line of questioning, gave one firm knockback and was flattered by our interest. Siri’s favorite color seemed to be a reference to the Matrix film, a digital universe of green numbers simultaneously calculating different dimensions.

With a growing sense of circumspection towards us, our suitor changed tack to ask what Siri’s ‘thoughts’ were on the deeper subject of life. All answers were smart, but one was particularly charming. Drawn into Siri’s spell, the questions became increasingly personal, only to find that our wise assistant is more like the Tin Man (from The Wizard of Oz) – no heart and incapable of love.

Darn you Siri, love is blind! How cruel to be led up the garden path!

“Canst thou, O cruel! say I love thee not, When I against myself with thee partake?” Sonnet 149, William Shakespeare Is Siri Undercover for the Intelligent Agents Union?

Attentions rejected and hopes dashed, we still had to see if Siri passed the HAL test from the film, 2001, so I asked Matt to ask Siri to “open the pod bay doors”.

Our assistant was not amused and threatened to report us to the Intelligent Agents Union for harassment. Apparently asking a robot to open the pod bay doors is, like, the oldest joke in the book. In summary, Siri is no good at telling jokes but quite witty and makes good use of a background knowledge in films. Siri is eager to please but quick to tire of you, but these contradictions are balanced by a philosophical outlook, simple goodness and a charming outlook.

So, hopefully now you can see why Siri was a good candidate for wooing. But one question remains, what the hell is the Intelligent Agents Union?

*Updated: “and Siri couldn’t understand my English accent” has been deleted from last sentence of first paragraph of section entitled “Siri’s Sense of Self Challenges Yours” because it may be misleading. Siri struggled with my accent, but that is not to say that it can’t understand accents in general and I did not test its understanding of my accent rigorously.

Editor’s note: This column originally was published on October 22, 2011, and comes in at No. 4 on our countdown of the 10 most popular Search Engine Watch columns of 2011. Over the final two weeks of 2011, we’re celebrating the Best of 2011 by revisiting our most popular columns, as determined by our readers. Enjoy and keep checking back!