SEOShould Hotels.com Get a Google Slap for Soliciting Paid Links From Bloggers?

Should Hotels.com Get a Google Slap for Soliciting Paid Links From Bloggers?

By now, every SEO worth his or her salt knows that exchanging money for links is an absolute no-no in Google's eyes. Apparently, Hotels.com didn't get the memo.

By now, every SEO worth his or her salt knows that exchanging money for links is an absolute no-no in Google’s eyes. Apparently, Hotels.com didn’t get the memo.

In early October, travel bloggers began receiving emails from someone with an @hotels.com email address, asking them to please write features or reviews about Hotels.com properties. Pretty typical blogger outreach, right? Except for this little gem at the end of the email:

“If you agree with partnering with us on helping us acquire backlinks, I would like to discuss a package or how you wanted to compensated to perform this assignment.”

Don’t worry, though, it was just the work of a rogue employee. A Hotels.com spokesperson made the following statement to media in light of the publication of the email:

“We work hard to adhere to the guidelines which search engines have put in place. The email is not aligned with our program and was the result of an internal misunderstanding that has been quickly identified and resolved.”

Now, if you believe that, I have some excellent swamp land for sale.

Expedia Brands Seem to Dabble in the Dark Arts

Are we to believe now that Hotels.com, an Expedia brand, had an SEO staffer go rogue and decide to pay guest bloggers out of pocket for links? Here’s the entire email (via Tnooz): I just don’t buy it, that this was some person acting on their own without the knowledge of the company.

It seems to me that bigger brands operate with near impunity when it comes to shady SEO tactics. They resort to these kinds of tactics because they know they can.

This certainly isn’t Hotels.com’s only foray onto the questionable side of the SEO tracks. Check out the astonishing number of pages they have indexed in Google:

Hotels.com is automating the creation of pages for just about every city, state, region, and hotel on the planet and when you visit those pages, the content is thin.

It’s a content farm that’s massive in scale and is propped up by an aggressive, automated internal linking structure, just one example of which is seen here: Now, most e-commerce sites do in fact have filtering and sorting features and want to link internally to different areas of the site to give users more choice. However, this seems more an example of automated pagerank sculpting with very aggressive anchor text.

It’s not technically a violation of Google’s guidelines – yet. But it is designed to pass pagerank from the front page to some 36 million internal pages, many of which are computer generated and feature hardly any original content.

Are Big Brands Like Hotels.com and Expedia Immune to Google Penalties?

Expedia took a hit last year when they were busted, by way of a 25 percent loss in search visibility, though neither Google nor Expedia would confirm a penalty was applied.

So far, the only flux we’re seeing with Hotels.com seems normal based on their seasonal traffic history.

Some of the more disenchanted among us believe big brands have some level of immunity from penalty for the types of activities that will get small businesses taken right out of the rankings. Sure, you hear of the odd one like RapGenius getting a big slap, but their penalty for soliciting paid links only lasted 10 days.

Remember how gleefully Google seemed to go after Ann Smarty’s MyBlogGuest? Even though she said they were against paid guest blogging and weren’t selling links, it was deemed a spam network in Google’s eyes. 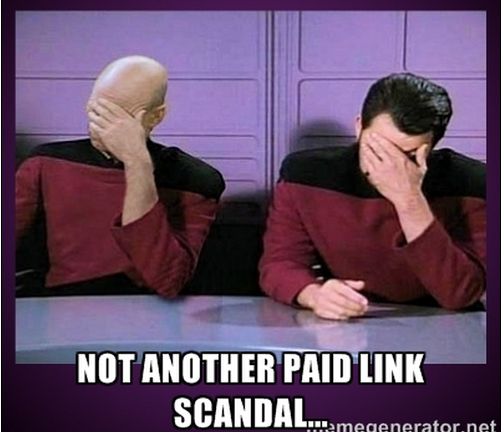 We see the odd big-name penalty, yet they seem almost silly and more apt to incite fear than teach a big brand a lesson. Case in point: News giant British Broadcasting Corporation’s March 2013 manual action notice for unnatural linking. It caused a fuss after the BBC sought help in Google’s Webmaster Forum, yet it was determined that Google was only concerned about one article on their entire site.

Or how about Overstock, who was penalized for two months in 2011 for offering discounts in exchange for links? Let’s be honest, the only reason they were penalized at all was because a competitor discovered the misdeeds and Google couldn’t not do anything about it. Ah, and let’s not forget the infamous JC Penney paid link scandal, also in 2011. In a statement that was out of character for Google, they actually confirmed that a violation had occurred…but only after approached by The New York Times. JC Penney’s penalty lasted about three months.

So no, I don’t think it’s fair to say that because big brands spend a ton in PPC advertising with Google, they’re free to dig into whatever black hat they want on the organic side. You can’t deny, though, that the biggest brands seem far more likely to suffer a penalty when they’re outed and Google has to do something about it or risk appearing biased.

Well, you can deny it, but I won’t believe you.

JC Penney dug themselves out of their rankings hole by blaming and firing their SEO firm. Let’s hope we aren’t seeing another SEO thrown under the bus because they were caught out doing what an employer expected or asked of them.

Who Are Hotels.com, Expedia, and Other Brands Really Competing With?

Of course, I could be totally wrong on Google’s complacence with big brands. Maybe Expedia and their associated brands just want to stick it to the man and see what they can get away with. It wouldn’t be surprising in the least, given their FairSearch.org fight against Google a few years back.

It has to be a bit of a kick in the teeth that the arbiter of fair rankings, the company with the power to knock them out of the rankings, is also one of their main competitors via Google Flights and Google Hotel Finder.

As Google continues to dive deeper into the content game, we really have to wonder if their power to punish those who would stoop to buying links just to compete against them is fair game in search.

We need to care about this – not just the brands getting hit, or the competitors who see these things happening and feel powerless to stop it. All of us, Google included.

These kinds of shady tactics provide huge rewards for the sites that get away with it, but it comes at the expense of everyone who plays by the rules. Seeing others get away with these tactics also gives others more incentive to give grey and black hat SEO tactics a try.

Maybe it was a rogue employee. Maybe the company wasn’t fairly informed of the risks of this type of behavior. But if Google doesn’t enforce routinely across the board, buying links just doesn’t seem as risky – it becomes a risk some SEOs and their clients are willing to take.

3m Mordy Oberstein
Are the days of pure organic growth over for apps?