SEOBing reveals the top US and UK searches of 2015

Bing reveals the top US and UK searches of 2015

It’s okay everyone, it’s December, we’re allowed to publish end of year lists now. Here are the top searches from 2015...

It’s just like how you can no longer roll your eyes when you see someone has put up their Christmas tree too early or how it’s no longer okay to complain to the already beleaguered shop assistant that they’re playing Christmas music in their store before December. You just have to grin and bear it.

Besides, Bing says we’re done collating stuff in 2015, and now’s the time to rank it all in order. What else you going to do in December? Work? Yeah that’s what I thought.

What is the point of looking at the previous year’s search history?

Apart from topping up your general knowledge ready for the inevitable new year pub quiz rounds on “most searched for stuff”, what is the real purpose of looking at this year’s trends?

“Understanding the interests and motivations driving search behaviour online provides invaluable insight for marketers into the audiences they care about. This intelligence allows us to empower marketers to create meaningful connections that deliver more value for both consumers and brands alike. By reflecting back on the key searches over the past 12 months, we can begin to anticipate what will inspire and how to create the right experience in the right context during the year to come.”

You may wonder what a high number of searches surrounding ‘Uptown Funk’ in 2015 can help you strategise for in 2016, but hopefully it will tell you that licensing that song for a new campaign will be a mistake because everyone and their grandmother has done it.

Ultimately though it’s all about knowing what brands, famous figures and events people really cared about, and maybe this knowledge can help companies connect more meaningfully with people in the new year.

Key highlights from the results show…

Cilla Black was more searched for than Kim Kardashian in the UK, although this was sadly because of her passing away. Neither celebrity could topple the might of Taylor Swift though, who was the number one searched for celebrity in the UK.

In the US however, Caitlin Jenner came top, followed by Miley Cyrus, Taylor Swift and someone called Kim Richards.

In the UK, the general election and Labour leadership contest took the 1st and 2nd spots on the news agenda list. The very recent attacks in Paris came third, searches about ISIS in fourth place and the birth of Princess Charlotte fifth.

In the US, it was the Paris attacks along with the ISIS threat that were the most searched for, followed by the EU refugee crisis. According to Bing, in the days and weeks following the height of the refugee crisis, people searched for how to provide aid and support to the refugees, particularly children, and what the US could do in response to the crisis.

The Rugby World Cup was revealed as the most searched for sporting event in the UK. Why are you English people telling me to shut up and move on already? Sheesh. In the US the top sporty search was for the Seahawks win at the Super Bowl.

In very heartening news, searches around the ratio of Women’s World Cup searches compared to Super Bowl searches increased from 7% in 2011 to 23% in 2015. 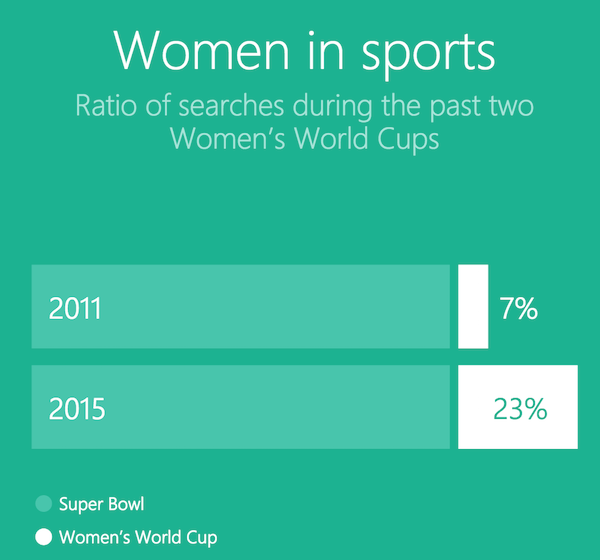 And Serena Williams took 51% of the search volume compared to the top five male tennis players who shared the remaining 49%. Uptown Funk was the most searched for song of the year, despite originally being released in 2014. I’ve already made a joke about this, so.. yeah… see somewhere above.

2y Kris Jones
Cross-channel marketing: why you shouldn’t put all your eggs in the Google basket

2y Rob Wass Akanshaa Khare
SEO in 2021: What your organization’s executives and senior leaders must know