EventsBeyond local SEO: Greg Gifford on how to win the visibility race

Beyond local SEO: Greg Gifford on how to win the visibility race

In a slide-show brimming with references to classic car movies, Greg Gifford raced through a host of tips and tricks that can massively improve your business’s local visibility and let you storm ahead of the competition.

The days of “just having a website” and trying to make it rank near the top are over; it takes more than just SEO to market to local customers. That’s not to say that local SEO isn’t important, of course, but it shouldn’t be your only consideration. By thinking about local SEO as just one part of a wider visibility strategy, you can ensure that your business has a presence across multiple channels, not just in search. That’s better for your customers as well as for you.

In his talk, Gifford gave a run-down of other key areas to pay attention to, and how to optimise each one to target exactly the local audience you want to attract.

But first, because search is still hugely important for a local business, here are some handy tricks that Greg Gifford shared which will help you get ahead in the SEO game.

You only need to look at pizza delivery for an example of how much weight local visibility now carries in search, more than ever before. If you Google “pizza delivery”, even without specifying a location, Google will serve you local results – whether you asked for them or not.

Any algorithm changes that Google makes to its local search results have the potential to shake things up hugely, and the businesses who adapt fastest are often those who end up on top.

Google’s ‘Pigeon’ update in 2014 was a massive game-changer for local SEO, and mobile-oriented ranking changes like Mobilegeddon can have a huge impact on local given that 94% of mobile searches have local intent. But if you live outside the US, you’re in luck (for once!): Google algorithm updates always hit the US before they roll out anywhere else, so by keeping an eye on what’s happening in the States, you can ‘future-proof’ your SEO tactics and know exactly what to do by the time the update comes to you.

And even if you live in the US, there’s still a way you can get ahead: Gifford recommends keeping an eye on Moz.com’s local search ranking factors research, an extensive survey conducted across SEO experts analysing the changes in ranking factors they have observed over the past year. This will give you the low-down on what changes search experts sense in the winds and how they recommend dealing with them.

Make your blog a local destination

Maintaining a blog is still an excellent content and SEO strategy, giving businesses a platform to publish regular, fresh and insightful content and build a relationship with their visitors.

But in the words of Greg Gifford, “Don’t just market your shit!” Make your blog a local destination; share all sorts of things that people want to read. Visitors will be turned off by a blog that is clearly just another mouthpiece for the company to promote its products. By thoughtfully curating all sorts of valuable local content, you can turn your blog into a go-to destination, boost its visibility and build relationships and links with other local blogs and businesses.

And speaking of local businesses…

Get those local business links!

When it comes to inbound links to your website, businesses will fight tooth and nail to try and get links from sites with the most domain authority. But Greg Gifford’s tip is one that many businesses wouldn’t even consider: go after “crappy little church websites”. You know the ones, with Microsoft Word clipart and neon green Comic Sans font in the header.

These kinds of tiny hyperlocal websites have a huge amount of local relevance, and so their links carry a lot of weight. Best of all, none of your competitors will be going after them, so you can snap them up and enjoy the boost. Increase your local SEO with inbound links from highly hyperlocal websites – even if they aren’t always of the best quality. Photo by Lincolnian, made available via CC BY-SA 2.0

Build ‘local silos’ to show up in nearby cities

If you want your site to show up in search for a city you’re not located in, Gifford recommends building what he calls ‘local silos’ targeted at nearby cities.

A silo is the name given to a system or sector that operates in isolation from others. You’ve probably heard a lot about we should be breaking down silos, but in this case, they can work to your advantage.

To build ‘local silos’, create little self-contained zones of information within your site that are based around the city or neighbourhood you want to target and optimise the heck out of them.

Publish blog posts about that city, get links back from local businesses, and make sure they point to pages within the silo; and before too long, you’ll see your silos start to rank in local searches for that area. Building silos can be a good thing, when it comes to local SEO. Photograph by Doc Searls, made available via CC BY 2.0.

Track your Google My Business clicks

In the midst of all the cool local SEO hacks, it pays to remember the basics, like making sure your business is listed on Google My Business and your profile is complete.

Gifford also advises adding tracking parameters to your Google My Business links in order to monitor the traffic coming to your site via that page. Local SEO Guide has a good guide on how to do this with Google’s URL builder tool.

It’s also worth keeping an eye on developments with Google Posts, which Google seems to be prepping as a significant platform for business promotion, and which could possibly be the next major development in local search if Google rolls it out on a larger scale.

How to optimise your email marketing

So we’ve covered the ‘local SEO’ part of local visibility; how about the ‘beyond’? Greg Gifford’s first tip might seem a little old-school, but it’s still one of the most effective marketing tools at your disposal: email marketing. Adding video to your emails can increase their attractiveness and interactivity, and a survey conducted by Forrester Marketing Group found that including a video in email marketing increased Click-Through Rate by 200 to 300%.

That statistic is from 2010, but more recent statistics have shown that just including the word “video” in an email subject line can raise open rates by 19% and Click-Through Rates by 65%.

Having a carefully curated list of email addresses to target can also come in handy when using Facebook Ads, as we’ll see later on.

If you’re going to commit to using video in your marketing strategy, Gifford has one key recommendation for you: don’t use YouTube. Instead, the video hosting service that Gifford recommends for keeping control of your content and tracking the important metrics is Wistia. 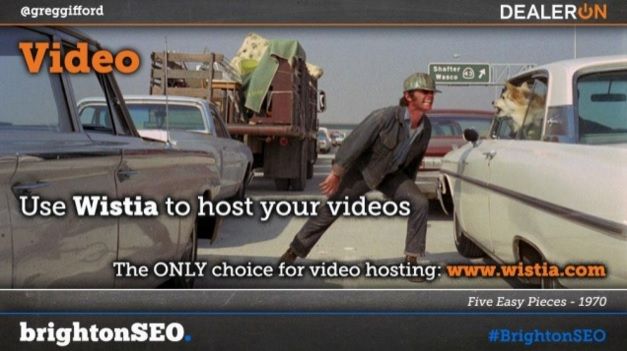 Here are some of the reasons he lists for opting for Wistia instead of YouTube or another major video host:

“Facebook ads used to be the drunk guy that showed up late to the party; now, they’re the cool guy that everyone’s stoked to see,” says Gifford. And if you’re looking to gain local visibility, Facebook ads have a lot of valuable advantages.

Facebook’s local awareness ads allow you to drop a pin on any point on a map, and ads will be shown on mobile devices within a certain radius of that point. Try dropping a map pin on your competitors, on an event or at a conference! Gifford’s final hot tip for local visibility is to use Beacons. Beacons are “small, Bluetooth-enabled hardware devices that can be installed in physical locations, like retail stores. They silently broadcast a message to any Bluetooth-enabled devices in their proximity, kind of like a lighthouse with text”, as Dan Cristo writes.

Usually Beacons require a dedicated app to work, but Beacon providers have begun setting up app networks which will allow Beacons to pop up a message on someone’s phone as long as any app in the network is running. The apps are location-aware, so they can be tagged by the Beacon even if they aren’t running. You can then connect directly to Facebook’s API, allowing you to retarget ads at actual foot traffic.

DealerOn, Gifford’s marketing and advertising company, ran some tests with Beacon and found they led to anything from a 34.6% to a 45.7% increase in Click-Through Rate on ads. At a recent conference, the Beacon at DealerOn’s booth tagged 687 unique users.

Beacons are still an emerging technology, but they have the power to improve the customer experience and potentially revolutionise search – especially in a hyperlocal context. So watch out for opportunities and get creative with how you use them.

Round up of all things SEO @BrightonSEO

Events Round up of all things SEO @BrightonSEO

4y Neil Goddard
The rise and fall and rise of SEO: notes on Brighton SEO 2018

Events The rise and fall and rise of SEO: notes on Brighton SEO 2018

Events The last word on Fred from Google's Gary Illyes

Events How to use Search Console for quick SEO wins

6y Tereza Litsa
How to master Facebook advertising and targeting

Events How a customer reviews strategy can impact SEO