Two months after warning Google would begin taking action against spam guest blog sites, Matt Cutts today announced that a large one was penalized. Ann Smarty, who runs MyBlogGuest, confirmed the penalty. The domain is gone from Google's results. 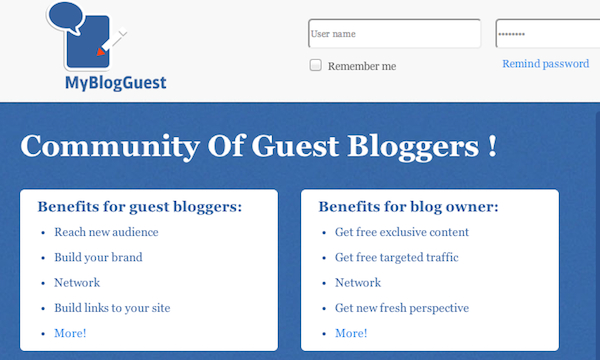 When Google’s Matt Cutts first announced the search engine would be penalizing a large guest blogging network, many people in the SEO industry instantly thought that it could possibly be MyBlogGuest, run by Ann Smarty, brand manager of Internet Marketing Ninjas. At the time, Smarty was pretty confident that MyGuestBlog wouldn’t be hit, primarily because it wasn’t a “network” and it wasn’t selling links.

Today we took action on a large guest blog network. A reminder about the spam risks of guest blogging: http://t.co/rc9O82fjfn

However, Cutts announced today via Twitter that Google has taken down a guest blogging network, and sure enough, MyBlogGuest was the one hit. It no longer ranks on Google for branded terms. Smarty confirmed the penalty on Twitter.

[Official] Even though #myblogguest has been against paying for links (unlike other platforms), @mattcutts team decided to penalize us…

Unfortunately for MyBlogGuest’s users, or those with links pointing to their site that originated through from the site, invalid link notices began appearing in their Google Webmaster Tools accounts this morning. It appears to be limited to those who used to service to find outlets for their guest blog posts and the links within them. However, as more users confirm they also received warnings, this could change.

Because MyBlogGuest had a very open policy on linking, and in fact stated that links couldn’t be nofollowed, there are going to be many sites that writers happened to include in their blog posts that had absolutely nothing to do with MyBlogGuest. Those unwitting sites could face unnatural link warnings/penalties as well.

Though Smarty doesn’t consider MyBlogGuest a blog network, many consider it to be exactly that. It was a well-known secret within the industry that agencies were using MyBlogGuest to promote clients as well as writers who would sell links quite openly, yet were both seemingly embraced by the MyBlogGuest community.

Whenever you have any kind of guest blogging network, especially combined with a strong policy where links could not be nofollowed, it would only be a matter of time before Google would be forced to take action.

Smarty told Search Engine Watch that it looks like Google used MyBlogGuest as an example.

“I’ve managed to build the huge brand – it’s huge enough for Google to hit it to get publicity! Can I be more honored?” Smarty said. “There are lots of networks that openly abuse the concept and promote paid guest blogging (I won’t list any names; I am not as bad as that!) but they choose to hit the oldest, best-known brand first – does it make sense? Instead of setting a good example, they make it obvious that no one is safe even such good guys as us.”

When Cutts issued his warning about guest blogging for SEO a couple of months ago, Smarty responded with a blog post proclaiming that she would not change the linking on the site to nofollow, and would not bow to pressure from Google to do so:

“Like any tactic, guest blogging needs to be evaluated from an intent and goal perspective”, said Ryan Jones, manager, search and analytics at SapientNitro. “Guest blogging in itself isn’t a bad tactic – if the goal is to provide useful content for a similar audience. A guest author on CNN or the New York Times, for example, is a valuable piece of content because it’s vetted and visitors find it useful.”

If MyBlogGuest had focused on the content and the value of the guest blogging, such as traffic or exposure, while ensuring that all links within an article had to be nofollowed, then it’s likely MyBlogGuest wouldn’t have been targeted and penalized.

“I guess we all knew that Google would take action against a site that would be seen to be the leader in that sector for 12 months,” said Dave Naylor, of Bronco. “I have been saying that MyBlogGuest would be targeted just because it was the leader in self-promotion like TLA in the text link industry. Google needs to make an example, but really what have they done other than ban a website that doesn’t look like it was breaking any rules.”

However, this wouldn’t be the first time that Google has penalized a network that was responsible for the spam comments instead of spamming for themselves. Many link networks have been penalized, along with the clients they did links for; digital marketing agency iAcquire was banned for their client work.

“The SEO community has a tendency to take good tactics, focus only on the link building part, and scale and automate them to the point where they become completely useless to site visitors,” said Jones, who will also be speaking at ClickZ New York on the Screw Link Building: Creating Revenue from Relationships and Brand Ownership panel, where alternatives to traditional link building will be discussed. “When I hear the word ‘network’ I automatically assume the worst.”

Supporters of MyBlogGuest have rallied around the service and Smarty, with the hashtags #isupportmyblogguest and #GoodGuestBlog.

“It’s interesting to see how the community is reacting,” Smarty said. “People speak up! I would have never expected that from people like @joehall, @JulieJoyce, @iPullRank and many, many others. It’s really amazing!”

When asked if Smarty has any plans to change MyBlogGuest policies beyond what it’s already doing in the hopes of getting the Google penalty lifted, her answer was simple: no.

“We are already policing the links: No made-for-SEO links are allowed within our platform (for at least a year now; We’ve been always advocating no-anchor-text links but we started actively policing them 2 years ago, then we stricken the rules even further),” Smarty explained. “You are free to link to your home page but no keywords are allowed (just names), for example. We’ve also encouraged brand links to social profiles and even created the separate section for Google Authorship and authors who were willing to link to their Google+ profiles.”

Editor’s note: Story updated to add quotes from Smarty, with an assist from Larry Kim, founder and CTO of WordStream.