While this change takes some control away from advertisers, there are other places to concentrate that can lead to bigger changes and have more impact on campaigns.

By now you’ve probably read that Google is killing off exact and phrase match in AdWords as we know them.

Now, it’s not a crazy-new feature – it’s been the default since 2012 – but what Google is doing is taking away the option for advertisers to opt out. The vast majority are already using it, Google points out, noting that “close keyword variations [receive] an average of 7 percent more exact and phrase match clicks with comparable click-through and conversion rates.” 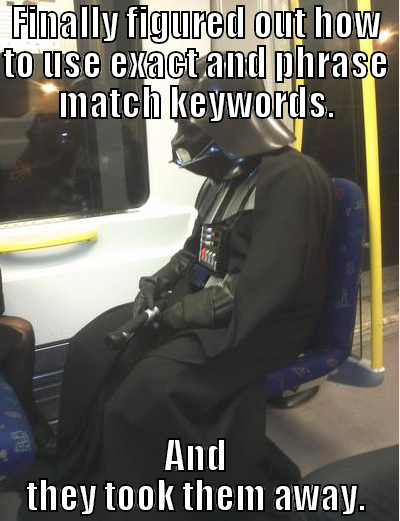 In my column today I’ll cover everything you need to know about the death of Exact Match and Broad Match Keywords in AdWords!

Who Will Be Impacted by the Change?

Most advertisers won’t see a difference in their account given the already high rate of adoption, Google says. That’s true – at WordStream, we estimate that only 3 percent of advertisers who had opted out and were using exact and phrase match will be affected.

What Are the Benefits of Close Variant Keywords?

The old way of trying to include every possible keyword variation in three or four different match types meant that an account with 10 million keywords was essentially 1 million keywords with 9 million variations – which was problematic.

It was like laying down cement foundation around your PPC account that, once it hardens, becomes impossible to change – you just have too many keywords and ad groups built out. So, for example, doing valuable or landing page or ad text optimization becomes exponentially more challenging.

Close variants allow you to expand your reach by tapping into those long tail searches that you wouldn’t otherwise have been able to get due to their low search volume.

Why Wouldn’t You Want Close Variants as Part of Exact and Phrase Match?

But I Don’t Want To Target Plurals or Misspellings!

There are plenty of instances where you simply may not want your keywords to trigger based on misspellings or the like. One of the biggest complaints among expert SEMs today about the news is that the plural version of a keyword may sometimes do better or worse than the singular version of a keyword by a large margin!

However, I think this particular use case isn’t as bad as it might seem considering that:

Why Would Google Get Rid of Exact and Phrase Match?

Match types made a lot of sense 15 years ago, but we now live in the age of keywordless ads. Someone asked me just last week at ClickZ Live San Francisco (a day before Google’s announcement) whether match type strategies are worth pursuing.

I said it could definitely help, though phrase, broad, and modified broad match types have become so blurred together the differences aren’t as dramatic as they used to be, and Google’s ability to infer search query intent has improved in the last 15 years since the introduction of exact match.

On the other hand, there are other places to focus your efforts that can produce far greater results, like finding killer unicorn ads and landing pages that provide massive three to five times improvements in ROI.

What Should I Do Now?

So while this change does take some control away from advertisers, it’s not the end of the world. There are other places to concentrate that can lead to bigger changes and have more impact on your campaigns. It’s time for us to focus on SEM strategy and not repetitive, time-consuming keyword expansion tasks.